Our warehouse is open from 8am to 5.30pm Monday to Friday.
Feel free to call 1800 680 680 to check on your order status, otherwise you will receive an email and/or SMS when ready to collect.

To repair and recondition pipes and cables underground can be a costly, time consuming operation. Any company undertaking an underground engineering contract needs to ensure that the routing of any shaft can be quickly and safely identified. Finding non-conductive pipes is significantly simplified and often, for the first time, made feasible by using the Cabeljet with Sonde System. Point and route analysis can be primarily undertaken using the Cablejet with Sonde system. A sonde is attached to the equipment at the beginning of the fibreglass rod which can be located easily thanks to a particularly strong magnetic field. Point location is used for locating defective points in pipeline systems such as blockages, sunken sections of pipe etc. The transmitter is connected to the connection box via two cables. Route location is used for tracking entire pipe courses. The transmission takes place along the entire length of the fibreglass rod. This version has the advantage compared with simple  pig transmitters that only one person is required for locating work and losing the signal is excluded. KATIMEX® locating systems can be operated with all standard transmitting and receiving equipment that works in the kHz range. The transmitter is connected to the equipment via the connection box by means of banana jacks or terminals. The locating depths and levels of accuracy are influenced primarily by the equipment specific data of the location or cable-finding equipment (transmission power, sensitivity of the receiver) and by local circumstances (structures and nature of the soil/walls, interference from other power sources etc.). The Cablejet with Sonde System contains of the Polykat fibreglass profile with integrated copper wires a sonde for end point determination, a connection box with socket and pins for two connections.

No Warranty on Rod, 12 months on frame.
0 Days Return to Base Warranty M12 to M10 Female to Female Reducer Connector for 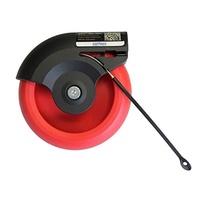